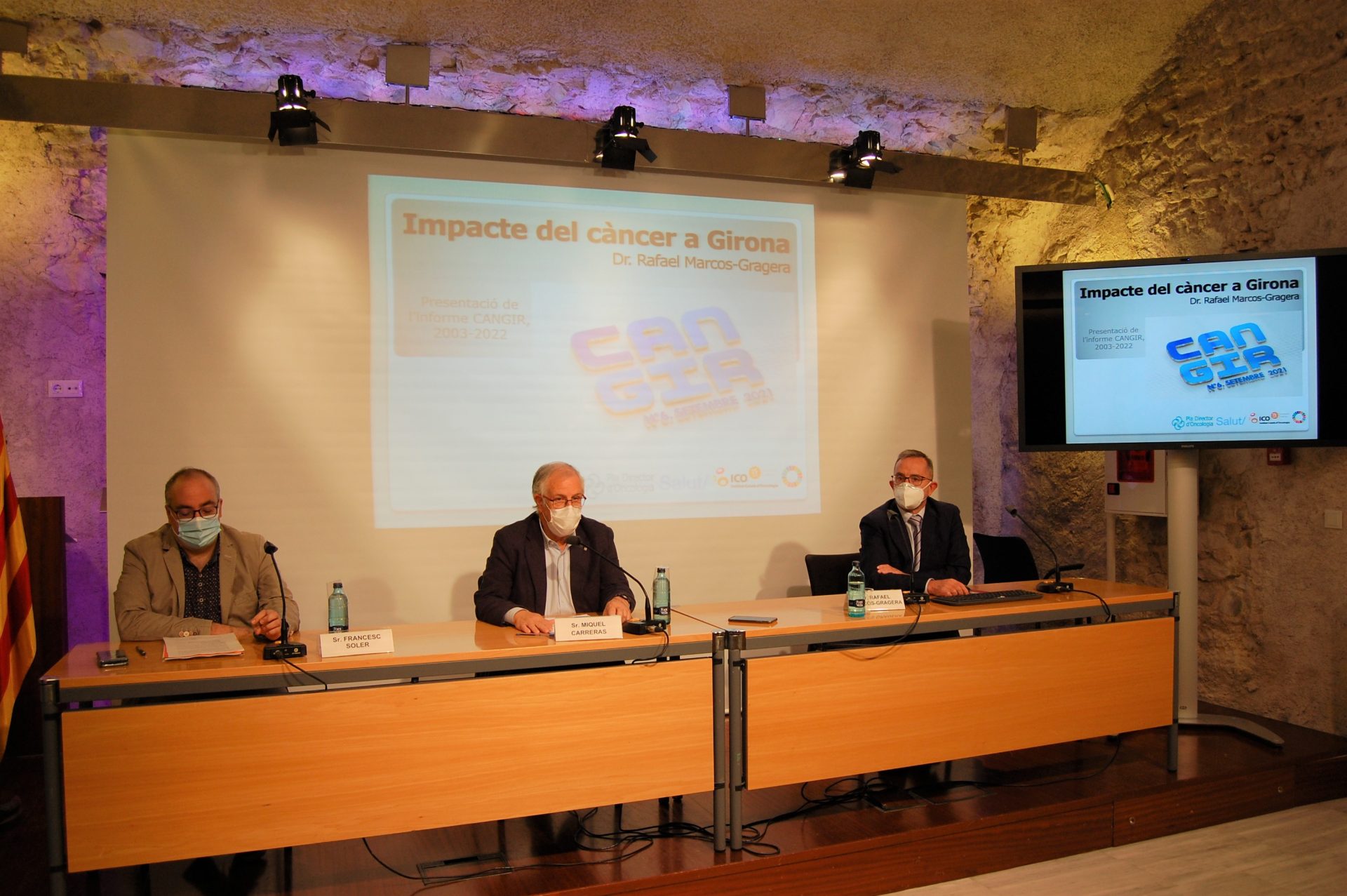 The Girona Health Region and the Catalan Institute of Oncology today presented the latest data on the impact of cancer in the region collected in the CanGir study.

This year 2021, about 4,200 new cases of cancer will be diagnosed in the province of Girona. This is one of the many data that can be extracted from the CanGir which presents data from 2013-2017 with estimates of incidence and mortality up to 2022 and an analysis of the evolution of these epidemiological indicators since 2003. Today, Wednesday 3 November, the manager of the Girona Health Region, Miquel Carreras, the care director of the ICO Girona, Francesc Soler, and the ICO Girona and IDIBGI researcher, Rafael Marcos-Gragera, have presented at a press conference the latest data from the Cancer Registry in Girona - incidence, mortality, trends and survival - collected in the CanGir study.

The CanGir was first published in 2005 with the aim of disseminating basic data on cancer in the province of Girona, as well as a tool for planning, prioritizing and monitoring the various actions aimed at controlling oncological diseases. CanGir is a publication of the Cancer Epidemiology and Registry Unit of the Catalan Institute of Oncology of Girona and the Oncology Master Plan of the Department of Health that collects information and epidemiologically analyzes cancer in the Province of Girona.

Some of the highlights for this upcoming 2021 are:

Main tumor locations and mortality
In both sexes, lung cancer will be the most lethal with 294 deaths (19% of all cancer deaths in the province of Girona), followed by colorectal cancer with 225 cases (14% of the total) and breast 97 deaths (6%).

The first 3 locations by sex and age will be:

Cancer Survival 2003-2014 Survival
statistics, the number of cancer patients diagnosed and alive at a given time after diagnosis, is one of the most widely used indicators in order to estimate the effect of treatment on disease. The survival interval is calculated between the date of diagnosis and the date of death or the end date of follow-up which in the current CanGir has been 31 December 2018.

Cancer population records usually calculate the so-called 5-year relative survival that represents 5-year survival after cancer diagnosis. In the case of Girona, the relative 5-year survival for patients diagnosed in the period 2010-2014 was 55% for men and 63% for women.

Cancer survival, as a whole, improved significantly from 2005 to 2014. Overall, the improvement was 1% for men and 0.20% for women. The locations that show the most significant improvement in survival are in men oral and pharyngeal cancers, myeloma, leukemias, pancreas, liver and lung and in women oral cavity and pharynx, larynx, bladder and discreetly breast. You can consult the CanGir in PDF format on the website of the Catalan Institute of Oncology.