Heregulin: a moonlighting protein that promotes resistance to hormone therapy in breast cancer 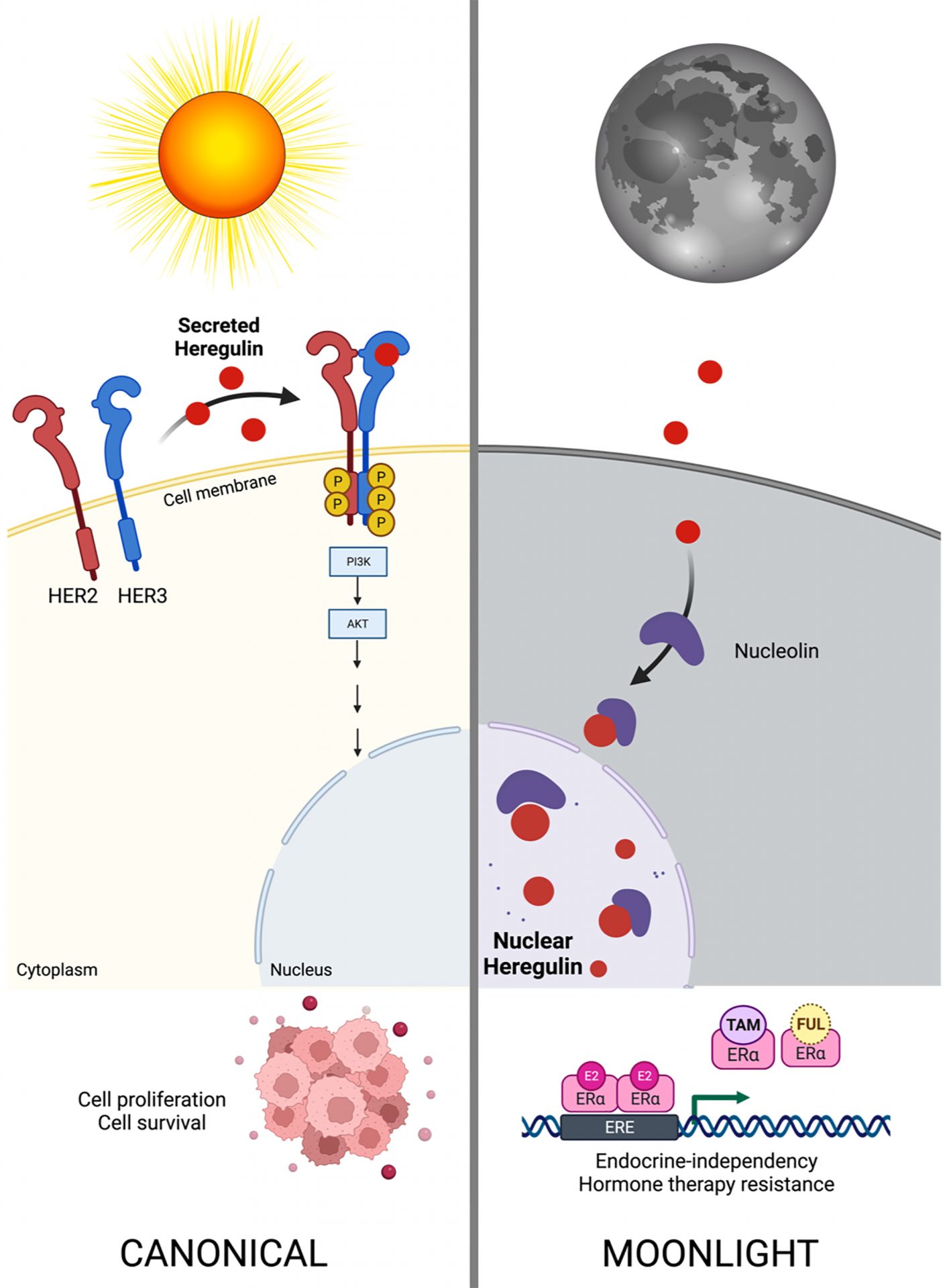 Our proteins are characterized by residing and performing their function in a single cellular compartment such as the extracellular region, the plasma membrane, the cytoplasm, or the nucleus. However, we have increasing evidence of "multi-employed" proteins capable of performing one function in their usual location ("in the sunlight") and another hidden function in unexpected cellular locations ("in the moonlight"). Dysregulation of these "moonlighting" proteins may contribute to tumor development or to increased aggressiveness and worse cancer prognosis.

A new study co-led by the Dr. Lupu lab at the Mayo Clinic in the United States and the ICO-IDIBGI “Metabolism and Cancer” group has just discovered that the growth factor heregulin –a known inducer of tumor growth by binding to its HER3 and HER2 receptors on the cell membrane– is a novel multi-tasking or "moonlighting" protein that, when residing in the nucleus of tumor cells, is capable of promoting resistance to hormone therapy in breast cancer. The study has just been published in the latest issue of the American Journal of Cancer Research.

A crucial feature in order to label a protein as moonlighting is that its functions at different sites must be independent, so that inactivation of one must not affect the second and vice versa. "We have known for years that the growth factor heregulin could reside in the nucleus of tumor cells, but we did not know whether or not its nuclear functions were independent of its canonical HER2-HER3 receptor activating effects", says Dr. Javier A. Menendez, head of the "Metabolism and Cancer" group of the ProCURE Program at the Catalan Institute of Oncology and the Girona Biomedical Research Institute and one of the co-directors of the study. Using molecular biology techniques, the researchers have now been able to delineate how, by entering the nucleus with the help of another protein called nucleolin, heregulin functions "in the moonlight" differently and independently from its classical "sunlight" HER3/HER2 receptor tyrosine kinase activating function.

Using cell and animal models implanted with breast cancer cells that have become resistant to drugs commonly used in the treatment of hormone-dependent breast cancer such as tamoxifen or fulvestrant (Faslodex), the researchers have shown that, while preventing the binding of heregulin to its HER3/HER2 receptors does not modify resistance to hormone therapy, preventing the nuclear localization of heregulin is sufficient to reverse such resistance even when HER3-HER2 receptors remain activated.

The subcellular distribution of the growth factor heregulin evokes different biological activities in breast cancer. Assessing its movements within the tumor cell and blocking its "moonlighting" activities could improve breast cancer prognosis and the efficacy of hormonal treatment against breast cancer.