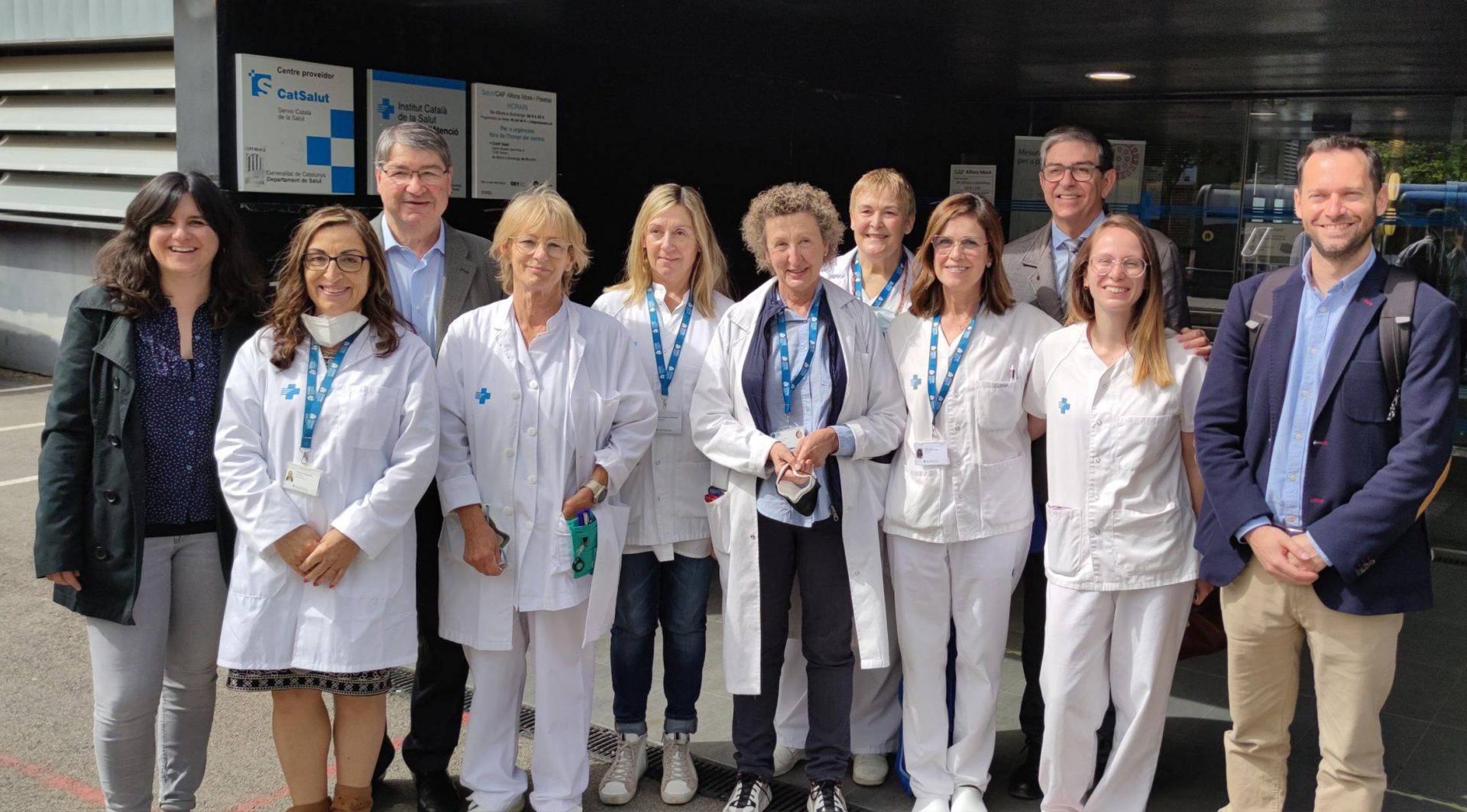 The Pulmonology Service of the University Hospital of Girona Josep Trueta has launched Innòbics-SAHS , a new European project to improve the diagnosis and treatment of obstructive sleep apnea in primary care centers. The project lasts 3 years and is the result of an initial idea by the Pulmonology team of the Trueta de Girona and Santa Caterina de Salt hospitals, as well as many years of research and leading clinical practice in this disease in the Girona hospital and several primary care centers of the Catalan Institute of Health (ICS) and the Institute of Health Care (IAS) of the Girona Health Region.

"Sleep apnea is a very important public health challenge, affecting one in four people and can lead to serious cardiovascular problems, neurocognitive disorders, and even work and traffic accidents if not diagnosed and treated. adequately ”, explains Dr. Anton Obrador, project coordinator and pulmonologist emeritus of the Sleep Unit of the Trueta Hospital in Girona.

The project has a budget of 3.1 million euros, and is funded by EIT Health and co-financed by the nine participating entities: the Catalan Institute of Health of Girona , the Institute of Biomedical Research of Girona Dr . Josep Trueta (IDIBGI), Fundación TIC Salut Social , Centro Hospitalar Lisboa Norte , Pulso Ediciones , TRC Informática , Interuniversitair Micro-Electronica Centrum , ResMed Spain , and OXIGEN Salud. The selection process to obtain project funding was highly competitive, with 164 European projects submitted, of which 33 went to the final stage and only 13 were awarded.

Improving the diagnosis in primary care

Obstructive sleep apnea is a disorder that causes an obstruction of the airway while the person is sleeping, due to a relaxation of the muscles in the back of the throat. People who suffer from it usually wake up several times during the night with a feeling of suffocation, although they are often unaware of it because they fall asleep again immediately. Other symptoms include snoring and wheezing while sleeping and excessive daytime sleepiness, which is one of the common causes of traffic and work accidents. The variability in the presentation of symptoms, the lack of suspicion of the disease and the difficulty of hospitals to be able to respond to all the demand make the diagnosis much lower than the actual incidence.

Sleep apnea syndrome is a very prevalent disease that mainly affects men between the ages of 30 and 60, which increases with age and body mass index. It is an underdiagnosed disease. According to researchers, only 10% of cases are currently diagnosed in specialized hospital units in Spain, which usually have waiting lists of more than a year. The goal of Innobics SAHS is to improve the diagnosis of the disease by 300%. As Dr. Obrador explains, "we want to act faster, reduce waiting lists and make it easier for patients to be diagnosed and treated at their referral CAP." And to make this possible, the Virtual Unit located in the Sleep Unit of the Hospital will be created and primary care will be provided with human and technical resources.

First, they will develop a short questionnaire (no longer than one minute) so that primary care medical or nursing professionals can pass it on to patients with suspected sleep apnea. A first screening that in the case of a positive outcome will be derived from a new professional figure in the CAP: the sleep nurse.

When the patient arrives at the sleep nurse's office at the CAP, they will be provided with an electromedical device (sleep polygraph) that they will need to use overnight at home to monitor their sleep and vital signs. A device that, until now, was only dispensed from the hospital sleep units.

In order to carry out the project, more than 60 nursing professionals will be trained and two virtual sleep units will be created, one in Girona and one in Lisbon, in which all the data obtained on the device will be poured so that the professionals interact and be able to virtually diagnose and propose treatment.

The public administration will at all times ensure the correct introduction and use of technologies in the healthcare process, as explained by Jesús Berdún, head of the project at the Fundació TIC Salut Social of the Generalitat de Catalunya: “digital transformation will be facilitated of a diagnostic process by integrating data and creating a virtual support unit. A fact that will provide primary care tools to improve the care process, and will bring direct benefits to patients.

Those responsible for the project say that the implementation of this new diagnostic procedure will reduce to 30 days the waiting list of patients who require to be referred to the sleep units of hospitals. In Catalonia, the diagnostic process will be tested in certain primary care centers and, after three years of the project, a proposal will be presented to be able to implement it in more Catalan centers and export it to other autonomous communities and European countries. At the international level, the key to this project is the support of EIT Health, which is a network of more than 150 partners with the support of the European Institute of Innovation and Technology, which is a body of the European Union. For this reason, the Innobics project will have wide access to the knowledge and skills of all European partners.

At the moment, there are already four basic areas of health (ABS) that are diagnosing sleep apnea with this methodology: Salt, Sarrià, Celrà and Dr. Joan Vilaplana - Girona. From May it will be introduced in Sils, Santa Coloma de Farners and Anglès. From June in Cassà de la Selva, Arbúcies, Sant Hilari and Breda-Hostalric. Between October and November, it will be implemented in the other basic health areas of the city of Girona and also in Banyoles. This will have culminated in all the ABS that have the Trueta and Santa Caterina hospitals as a reference, and it will be possible to continue advancing in the rest of the territory.

The project arose in 2014 from the concern of the head of the pulmonology service of the two centers, Dr. Ramon Orriols, shared with his medical team, who saw the underdiagnosis of sleep apnea as "a medical problem of the highest magnitude . " Thus, work began with the team of pulmonologists and the basic health areas of influence of the two hospitals, in order to diagnose sleep apnea from primary care.

From 2014 to 2016, a pilot test was conducted, led by Dr. Eric Rojas, pulmonologist at the Sleep Unit of Trueta and Santa Caterina Hospitals. This project was based on the idea that 80% of people at some point in their lives are cared for in a primary care center. And the main users of these resources - patients with a high prevalence of diabetes, high blood pressure and obesity - are also those who suffer most from sleep apnea. Therefore, primary care centers were considered to be the ideal area for the diagnosis of the pathology.

The study consisted of a comparison of diagnoses of obstructive sleep apnea that could be obtained through nocturnal pulse oximetry and home respiratory polygraphy, which were automatically analyzed and evaluated by primary care medical professionals in their environment. assistance, with the diagnosis of respiratory polygraphy analyzed manually, and the practice of complete polygraphy assessed by the pulmonology professional in the hospital environment.

The study focused on two ABS that have the Trueta as a reference hospital (Sarrià de Ter and Santa Clara) and two ABS that have the Hospital de Santa Caterina as a reference center (Sils and Salt). A total of 599 patients were randomly selected, of whom 97 eventually participated. 61% of these patients were men, with a mean age of 57 years, with grade 1 obesity and most were ex-smokers.

In conclusion, the study indicated that obstructive sleep apnea can be diagnosed in primary care and that automatic analysis can diagnose obstructive sleep apnea, especially when it is severe. These results were shared at numerous national and international conferences and the good reception of the project encouraged researchers to submit it to EIT Health.

The main risk factor for obstructive sleep apnea is obesity. In milder cases, medical professionals often recommend lifestyle changes, such as a balanced diet and exercise, to lose weight, or to quit smoking. In the most moderate or severe cases, patients should use - usually temporarily, but also in some cases indefinitely - a device of continuous positive airway pressure when sleeping. Exceptionally, only a minority of patients require other methods or even surgery to prevent airway obstruction.