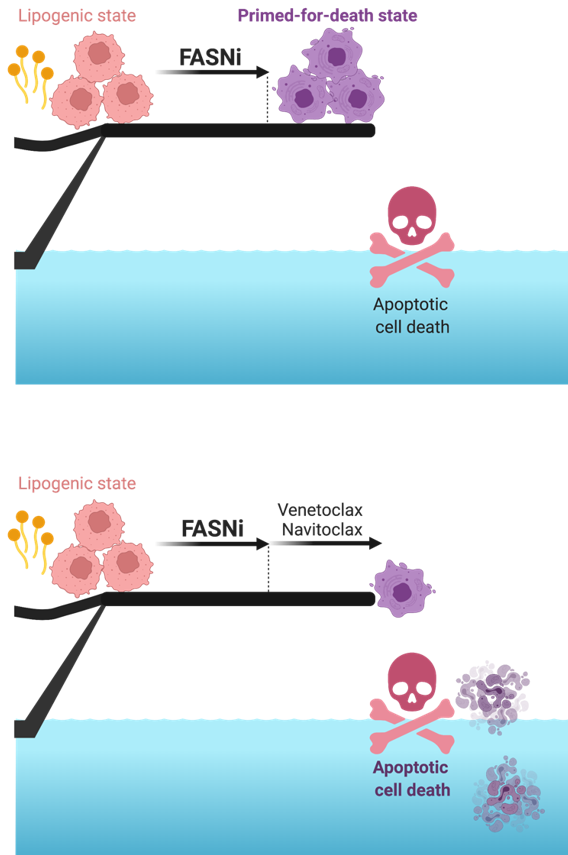 Tumor cells have an internal fat factory - fatty acid synthase (FASN) - that allows them to divide uncontrollably and metastasize to the brain when external lipids from the diet are scarce. Ten years have elapsed since numerous pharmaceutical companies began designing drugs capable of inhibiting FASN function for the metabolic treatment of cancer. Unfortunately, only one of them has managed to reach the clinical trial phase in patients, while the development programs of all the rest have been halted due to their partial and transient anti-tumor effects.

Researchers from the "Metabolism and Cancer" group led by Javier A. Menendez, from the Program against Cancer Therapeutic Resistance (ProCURE) at the Institut Català d'Oncologia (ICO)/IDIBGI in Girona, in close collaboration with Ruth Lupu's research group at the Mayo Clinic in the United States, have just solved the reason for the therapeutic failure of most of the anti-FASN drugs developed to date. The research, which has also involved the collaboration of Joan Montero's group at the Institute for Bioengineering of Catalonia (IBEC), has been published in the journal Cell Death & Disease and opens the door to new forms of cancer treatment.

Tiny organelles inside cells called mitochondria are responsible for deciding which cells should survive and grow and which should self-destruct and die. ICO/IDIBGI researchers have established for the first time that inhibition of the lipogenic activity of FASN determines the readiness of mitochondria to release through their membranes chemical compounds that trigger tumor cell self-destruction, a phenomenon called mitochondrial priming.

"We observed that mitochondrial priming is the determinant of the initial response of tumor cells to FASN inhibitors," the authors note. If mitochondria do not alter their membrane in response to FASN inhibition, tumor cells will be far from their self-destruct threshold and resistant to anti-FASN drugs. Conversely, if the mitochondria membrane is readily altered in response to FASN blockade, then tumor cells approach their threshold for programmed cell death –apoptosis– and will be more sensitive to anti-FASN drugs.

The fact that cells sensitive to FASN inhibitors are "primed" to die allowed the researchers to discover a molecular weakness that can be exploited therapeutically. "Anti-FASN drugs require a second apoptosis-accelerating therapy to unleash their true anti-tumor potential" stresses Dr. Menendez.

"Walking the plank”: How to execute tumor cells with two inactive drugs

In response to FASN inhibition, tumor cells activate the expression of death initiators, which immediately bind to survival guards, thereby resulting in a delicate balance before deciding whether the effectors ultimately execute the cellular self-destruction process. Unable to synthesize fat internally, tumor cells treated with an anti-FASN drug become addicted, for their survival, to the molecular signals generated by one of the gatekeepers called BCL-2. When tumor cells with their FASN blocked were exposed to navitoclax (ABT-263) or venetoclax (ABT-199), two drugs already used in oncology patients to specifically block BCL-2 survival signals, massive self-destruction of tumor populations occurred in vitro.

"The strategy is very similar to the punishment that pirates used to employ by making their prisoners walk the plank before throwing them to certain death into the sea," explains Dr. Menendez. "The FASN inhibitor forces the tumor cells to get close to the edge of the plank, but not close enough for them to rush off and die. A second treatment is needed to provide the final push, causing them to fall to certain death."

Simultaneous oral administration of TVB-2640 - the first FASN inhibitor that has begun to be used as an anti-tumor therapy in cancer patients - with the BCL-2 inhibitors venetoclax and navitoclax produced a cooperative effect in inhibiting the growth of human breast cancer tumors implanted in mice. The potent anti-tumor synergy observed in vivo with the combination of anti-FASN and anti-BCL-2 drugs could decrease their effective doses and undesirable side-effects, which would increase the so-called therapeutic index in oncology patients.

"These results, taken together, would justify the clinical evaluation of a combined development of anti-FASN and anti-BCL-2 therapies in primary or metastatic tumors dependent on the lipogenic activity of FASN," the authors of the work point out hopefully.